November 12, 2012
Last week I discussed some newly-explored proof-theoretic relationships between reasoning about process calculi and substructural logics, and vaguely mentioned some other programming models that I wanted to compare. Since then, I think I've come up with a way to phrase my research objective with this project: to relate the programming and reasoning methodologies surrounding interactivity through a common medium of proof theory.

That's not a thesis statement, but I figure it's better than "*waves hands excitedly* interactivity! Processes! Linear logic! Focusing!"

Anyway. What I've done so far has given me more questions than answers, but I like the questions a lot. The first of these questions I want to discuss in this post is "How can proof theory capture an appropriate notion of broadcast message replication?" To explain what I mean by that, I'll describe an example which I think captures some common interactive communication patterns.

Consider a simplified Lights Out puzzle, a 2x2 grid of lights where toggling one also toggles its neighbors. Here's an implementation of the game (modulo its win condition, which I'll get to later) in puredata, a visual language where boxes represent signal-varying values, and edges represent the paths that signals follow. A human can send a (unit) signal to a box by clicking on it. 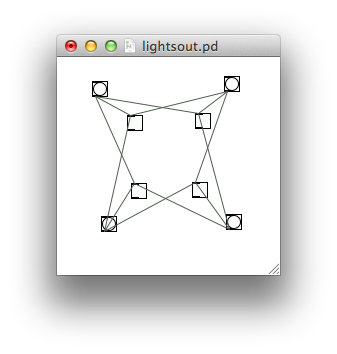 (Does a screenshot count as source in a visual language? Should I also post the inscrutable text format it saves to? Oh well, here it is.)

A line between the bottom of box A and the top of box B means that whenever box A outputs a signal, box B receives it. The square (circleless) boxes are "toggles", i.e. they can be on or off, and the circles (boxes with circles in) are "bangs", which just send a unit signal on their output line when they receive any signal on their input line. In this sense, the toggles are the indicators of the light state, whereas the bangs are the switches. To see why this separation is necessary, consider just wiring the input and output lines between all the neighboring boxes directly (text source): 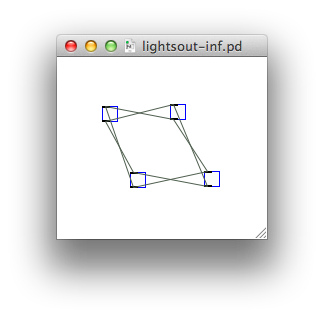 Clicking on a toggle changes its value and sends a signal on its output lines, which then toggles its neighbors, which then send signals on their output lines... which inclue one back to the source. This creates an infinite loop; Pd's stack overflows, and the rendering never (visibly) changes. The level of indirection -- the separation of switch and indicator -- is necessary to stop the control flow after one signal propagation.

Another way to view this problem is to consider its encoding in CLF (eliding initial type declarations):

Indeed, a query such as

The working version (corresponding to the working pd program) is encoded as follows:


Output signals from toggles are no longer needed; the human signal just directly toggles each neighbor. The input signal then just flips the indicator and emits no output (it could do so, but it would never be used).

This encoding has made a seemingly complicated interaction pattern much less interesting: it's now just a bunch of broadcasts from a single source that affect overlapping sets of receivers.

But there's still a component of this interaction pattern that's difficult to express in linear logic/CLF, which has to do with the fact that I've gotten away with a pretty big cheat by limiting the puzzle to a 2x2 grid: every cell uniformly has one udnbr and one lrnbr. In a bigger puzzle, cells can have two, three, or four neighbors. Ideally, we could program the neighbor relation separately, and have a toggle trigger the input signals of all its neighbors.

This is a sort of message copying, but it isn't the standard repeat described by ! in linear logic. Instead, it's a broadcast: 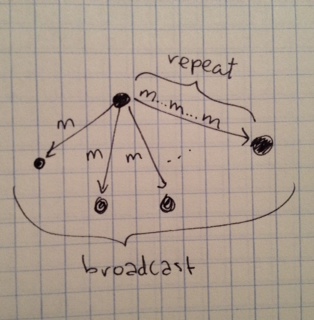 Instead of indicating infinitary nature of the message itself, we'd like to be able to describe the set of recipients infinitarily (even if they are in fact finite). We might think to use a universal quantifier, and write something like the following CLF (read Pi as forall) to broadcast to all neighbors:

...but in the semantics of proof search, all this does is let us nondeterministically pick one neighbor to propagate an input signal to. We can instantiate the quantifier with any node N', and supposing we have that nbr N' N, the quantified statement will be replaced with sigin N', its original form discarded, unable to be used by other neighbors. (Furthermore, the quantifier might even be applied to a node that isn't a neighbor, leaving a useless implication in the context indefinitely!) And making the quantified statement replicating (with !) would be no better: since nbr facts are persistent, the same neighbor could instantiate the quantifier arbitrarily many times, making the message both repeated and broadcast.

In the sense that a universal quantifier is a form of infinitary conjunction, this suggests to me that CLF's Pi is like infinitary & ("with", additive conjunction in linear logic), in that proof search can choose how to quantify it, but it can't make several simultaneous choices. What we want for this behavior is something like an infinitary \[
\otimes
\], i.e. a positive universal quantifier. Jeff Sarnat informed me that some literature on bunched implications explores such a quantifier, but that it is folklorically known broken; I'm afraid I'm not well-versed enough in BI to understand why, but would be interested to try if someone can explain. (My
understanding of BI itself is pretty limited.)


Another slightly kludgy thing about the CLF implementation -- although it's a cute dependent types hack -- is the instance parameters, i.e. the fact that every predicate takes an argument to indicate which toggle it's talking about. Again (and this goes back to my initial comments about modularity and interface boundaries) it would be nice if we could describe the lightswitch interface generically and indicate separately the relationships between several instances of them. This begins to sound suspiciously similar to (my nebulous understanding of) the early, message-passing-based part of object oriented languages' history, and I believe puredata itself is based on an object model. Accounting for some limited use cases of objects like this might not be outside the scope of this project.
interactivity linear logic logic programming puredata