March 13, 2013
I'm hereby resolving to stop biting off more than I can chew wrt blog posts - I've got two behemoths in drafts over just the past few days and nothing to show for them (yet). So right now I'm going to try to carefully explain a tiny example that I just worked out over the past half hour and I think nicely encapsulates a few ideas about using Celf and linear logic in the context of interactivity.

Here's an informal spec for a simple branching game with a couple pieces of global state that track whether certain paths have been taken:

The cellar and the den are connected rooms. The lamp and the key are in the den. The cellar contains a door, which is locked and must be opened with the key. Once the door is unlocked, the player enters darkness, and if they have a lamp, they win; otherwise, they are eaten by a grue and lose.

Here is the author's eye view of the game as we'd write it in Twine: 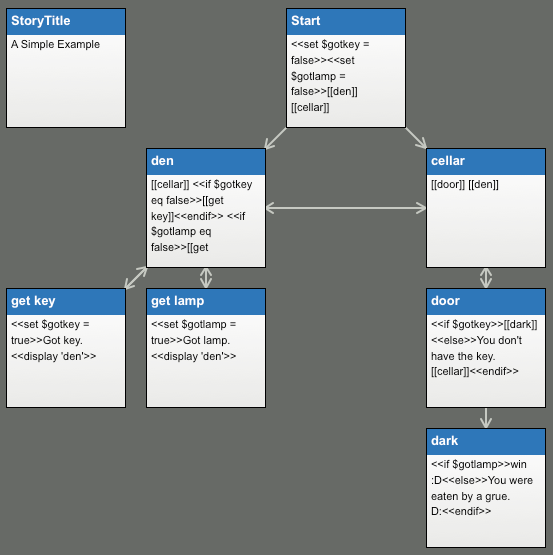 (You can interact with the output of the build here.)

The pieces of global state here are represented by two boolean variables ("<<set $x = ...>>" and "<<if $x eq ...>>" are Javascript macros under the hood). Double-brace [[links]] make a player control to navigate to the linked passage, and the edges in the graph show what's linked to what. This simple visual authoring tool gets a lot of people started writing their first games/interactive stories, and many have used it to build stunningly complex and evocative narratives.

Here's how I'd translate this game into a purely-atomic, forward chaining linear logic program, adding one rule at a time:

When the player begins, they choose to go to the den or the cellar.

This works if we always want to display the option to get the lamp and the key, even after they've been retrieved. If we want to conditionally display those choices, we'd need a rule like this:

We stay in the den if we try to get the key or the lamp.

Instead of changing a boolean value, we consume one piece of state and replace it with one intended as its complement (most logic programming languages don't support negation directly, but it's easy to encode with a predicate, so this is really just a shortcut).

From the cellar, we can go back to the den or try to open the door.

If we have the lamp, we win; otherwise, we lose.

Okay, so far, all we've done is transcribe the game in a funnier-looking notation. Instead of trying to make arguments about linear logic versus imperative programming and their relative scalability for programming state, I want to point out something distinctly cool we can now do.

First, let's make this a properly parsing Celf program with rule names that might be somewhat informative. I've also added a reporting mechanism, breaking slightly from the atoms-only fragment with a dependent type whose index is w if we win and l if we lose. We also set up the initial state {nokey * nolamp * start}.

Now note the query at the bottom:

This says (letting the first three arguments to query, which I can never remember, be whatever their defaults are) that we want to run the query 10 times, starting the state with init and succeeding if the final state reports a value.

Due to the nondeterminism in forward chaining, what this does is actually randomly simulate ten complete gameplay iterations. And if we've named our rules cleverly enough, the proof terms it outputs, such as the one below, show us exactly the trace of that gameplay:

Every "#n" indicates a choice between alternatives presented between "&"s, and tuples [X, Y] are the proof terms for tensored resources (A * B). What we get here is a linear sequence of moves carried out by a player, eventually resulting in a win or lose condition. And we get ten iterations to examine, effectively automatically fuzz-testing the playable space.

What's also interesting to consider is that the variable dependencies captured here can let us reconstruct a "causality graph", which shows the structure of this proof up to concurrent equality -- something of interest to computational narratology that I'm currently working on with Gwenn Bosser.

One thing to note is that the player bounces around a lot between the cellar and the den because that's always something available to do. How can we direct proof search to more accurately simulate a goal-driven player search strategy? One end of this spectrum is complete, playable interactivity, but I'd like to explore more points along the spectrum of automation to interaction.