"Tamara" as a concurrent trace

November 04, 2014
My last post described the idea of concurrent storytelling to encapsulate the idea of narrative structures where simultaneous action can lead to multiple experiences of a story, either through nondeterminism or through differing sequential traversals of the story graph.

Since then, I have obtained a copy of the Tamara script (which is written like a really bizarre choose-your-own-adventure book) and begun transcribing its scene structure as a deterministic Celf program such that the output trace models the scene dependency graph.

To do this, I model each of the 10 characters as a predicate over a location and a scene identifier, e.g.

The scene IDs roughly correspond to the letter-and-numbered scenes in the script, except that they are slightly finer grained to accommodate the different perspectives induced by character entrances and exits, although those entrances/exits are contained within a single script-scene.

In the simple case, a rule describing a scene's structure would take its required characters (indexed by the corresponding scene number and location) as premises and spit out those same characters as conclusions, but now indexed by their new scenes and locations. For example:

This rule describes the script scene B8, a dialogue between Emilia and Carlotta, after which Emilia exits to the dining room and Carlotta exits to the atrium (both of which are part of scene C12). I coded up sections A through C this way.

The resulting output is this big sequence of let-bindings, which I drew out on paper to visualize the dependencies: To figure out whether my idea for compiling this structure into a Twine passage graph made sense, I did this example by hand. The basic translation was variable Xi in the CLF trace (which represent characters in certain states) would turn into passages named Xi, whose contents are purely [[links]] to scenes that the character transitions to at that state. Scenes are also passages, named e.g. b8, which contain the text of the scene as well as <<display>>ed variable passages representing the characters who are part of the scene. In cute mnemonic form: characters "link" the viewer to a scene; scenes "display" characters to the viewer.

For example, the scene passage corresponding to the CLF trace line

would have the title "b8_emilia_carlotta", and contain the text

while the *variable* passages X43 and X45 would contain the text

The resulting Twine passage graph then has isomorphic structure: 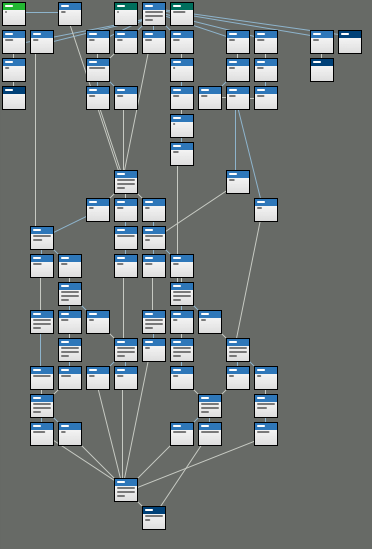 ...and you can play it, choosing who to follow as you would in the original performance. Though please note that I've elided a huge amount of text, including introductory context, so it may not be too meaningful for someone unfamiliar with the play. Doing this compilation by hand is hugely labor-intensive, so think of this as a teaser that you may choose to ignore until I've written the compiler and produced the story in full.
computational theater linear logic procedural storytelling thesis