Paper and game of the week

November 04, 2016
I'm going to try to loosen the ol' blogging joints a bit by experimenting with a weekly feature: a Paper and Game of the Week, posted every Friday morning. My goal will be to keep a record of recent research inspirations in the hopes of exposing interesting gems to others, and providing better context for my own work. I will preemptively establish the expectation that the paper and game of the week may not *literally* be a paper and a game; the objective is more like "something CS-academia-centered" and "something creativity/arts-movement centered," which for me in recent weeks has mostly meant papers and games, but at other times has included talks, interactive essays, plays, art exhibits, and weird internet art.

So without further ado:

Paper of the Week

Commonsense Interpretation of Triangle Behavior by Andrew S. Gordon (not Andrew D. Gordon, although his papers might easily feature on this blog too).

This paper is a formalization of the reasoning that psychology researchers Fritz Heider and Marianne Simmel observed takes place in humans when shown abstract animations and asked to explain what was going on. Here's the movie they showed subjects:

Their study showed that people produce consistent narratives for what is "happening" in the movie, universally ascribing human-like behavior such as beliefs, goals, emotions, and social relationships, despite there being no words or concrete human features assigned to the triangles or circle.

Gordon refers to the type of abstract but legible-as-human behavior in this video as triangle behavior, a term I enjoy partly because I now live in The Triangle and partly due to a certain artist-mathematician's love of triangles.

In Gordon's paper, he presents a hand-authored library of logical rules that perform abductive, probabilistic reasoning to capture this kind of commonsense social reasoning. The system will take as input a logically-modeled description of an animation, such as "The triangle opened the door, stepped out- side and started to shake." Then it can answer queries such as, "Why did the triangle start to shake?" with options like "because it was cold" or "because it was upset." Without further context, the system responds with the first reason being the most likely. On the other hand, if this action is contextualized with a social situation, such as being attacked by another shape inside the area that it left, the system reasons that there is higher probability that the triangle is shaking because it is upset.

I find this paper interesting first of all because it's a AAAI paper in 2016 that uses symbolic knowledge engineering, which I had practically written off as a nonstarter (and haven't bothered submitting any of my own work there for this reason). In the structure of the research problem and solution, it's quite similar to my & my Santa Cruz collaborators' work on formalizing proceduralist readings as a logic program, where in that work the "human" reasoning we're trying to encode is understanding a high-level, experiential meaning from a game bases on its mechanics and communicative affordances.

Second, this paper is quite interesting from a visual narrative point of view. Our proceduralist readings work was aimed at eventually generating games based on meanings; likewise, one could imagine such a system being run in the reverse direction to accept meanings (or alternatively, communicative goals) as input and produce animations that satisfy them. The reason this paper came across my radar in the first place, in fact, was that the Visual Narrative group here at NCSU was reading it.

Game of the Week 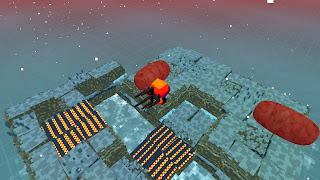 I have been playing Stephen's Sausage Roll very slowly. It's a wickedly hard puzzle game that, I'm told, gets increasingly interesting with time, though so far it has been mainly a slog (and occasional youtube hunt for a solution). I'm not sure I agree with my peers that the puzzle design is flawless -- I've definitely completed puzzles for which I'm not sure I could repeat the solution -- but it's certainly satisfying to finish each new puzzle, and I keep coming back for more.