Paper of the Week: Imaginative Recall with Story Intention Graphs

By Sarah Harmon and Arnav Jhala. Bias disclaimer: both Sarah and Arnav are folks I've worked with and consider colleagues.

Imaginative recall is the process of generalizing and extrapolating previously-seen narrative examples to create new ones. Harmon and Jhala present an automated system for carrying out this process based on a narrative representation scheme called story intention graphs (SIGs).

This paper was a bit hard for me to tease apart initially because there are really two things going on:
(1) is largely prior work, but lays the groundwork and motivation for their project. Ultimately they are interested in the problem of carrying out processes on narratives such as adaptation, transformation, and measurement of complexity. However, although Minstrel/Skald can do something interpretable as these processes, they need a means of evaluating exactly what it can do and how it compares with other systems, which motivates contribution (2).

The problem they face, as I understand it, is a lack of standards: Skald doesn't have an agreed-upon semantics that permit mapping from internal representation to natural language, and furthermore, its output cannot be compared to that of similar systems, because there is no common format for comparison.

They thus propose story intention graphs as an answer to these problems. Story intention graphs began as an informal, analytical paradigm for dissecting narratives into many kinds of relationships between events, characters, and underlying motivations. The canonical example is the Aesop fable "The Wily Lion":

A Lion watched a fat Bull feeding in a meadow, and his mouth watered when he thought of the royal feast he would make, but he did not dare to attack him, for he was afraid of his sharp horns. Hunger, however, presently compelled him to do something: and as the use of force did not promise success, he determined to resort to artifice. Going up to the Bull in friendly fashion, he said to him, “I cannot help saying how much I admire your magnificent figure. What a fine head! What powerful shoulders and thighs! But, my dear friend, what in the world makes you wear those ugly horns? You must find them as awkward as they are unsightly. Believe me, you would do much better without them.” The Bull was foolish enough to be persuaded by this flattery to have his horns cut off; and, having now lost his only means of defense, fell an easy prey to the Lion.

...which maps to the following SIG:

This graphs relates lexical components of a story to interpretive nodes such as goals, and, most importantly, relationships between goals, story states, and affectual impacts on characters, which allows us to analyze The Wily Lion in terms of the crucial fact that the lion's intention to eat the bull provides for the lion, but damages the bull, leading to conflict. Representing this type of information permits reasoning over generalized patterns, such as betrayal and revenge, to try to find similar structures across a corpus of stories.

Meanwhile, Skald stories are unordered collections of "case frames" representing goals, states, and actions. Case frames are simply records with labels like "actor", "object", "scale", "to", "type", and "value", which, e.g. for actions, track the subject and direct and indirect objects of the action.

So the majority of the paper describes a compilation strategy from stories in Skald case frame representation to SIGs. Then, The conclusion of the paper states that the same strategies for analogical reasoning and recall in Skald may be applied to SIGs in a more enriched, extensible way.

Game of the Week: The Voter Suppression Trail

Voter Suppression Trail is a tiny (news-article-length) empathy game created for the New York Times on U.S. election day. In it, you are invited to experience three distinct simulations of the voter experience across demographics and geographic locations. 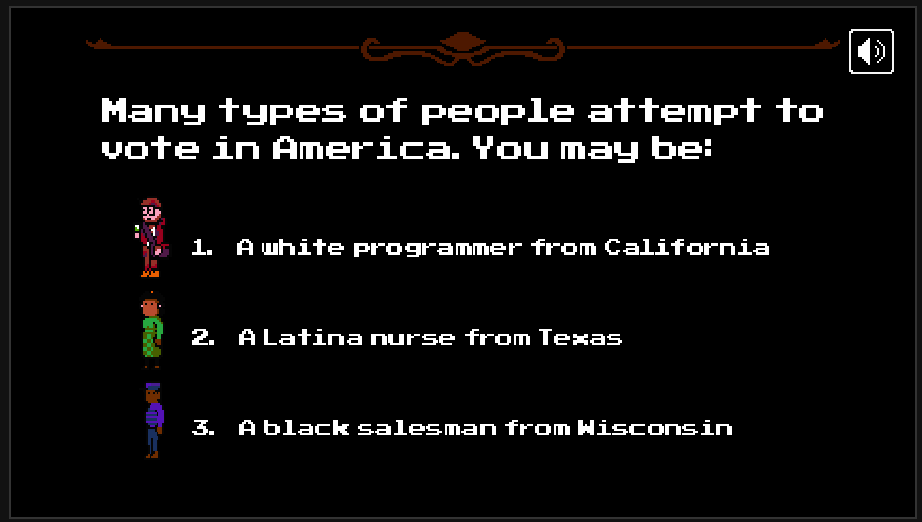 While I am skeptical of the concept of "empathy games" for many of the reasons discussed by Mattie Brice and others, I find it encouraging that the notion of communicating a different viewpoint through an interactive experience is finding its way into mainstream media outlets. I find this game interesting in part because of all the things it could be but isn't: for example, to illustrate systemic oppression, it would be more convincing to encode real facts about demographics and polling locations and allow these racialized disparities to emerge as consequences. There is something of an opportunity for generative methods to provide more believable arguments along these lines, where hand-authored stories like this one can always be explained away as cherry picking.