November 20, 2016
This past week I attended (and co-chaired, organized a workshop for, and presented at) the International Conference on Interactive Digital Storytelling (ICIDS). In celebration of a successful ICIDS, I'll share a Paper and Game of the Week each of which I discovered during it.

Paper of the Week: "Using BDI to Model Players Behaviour in an Interactive Fiction Game"

By Jessica Rivera-Villicana, Fabio Zambetta, James Harland, and Marsha Berry; available for download on ResearchGate. Disclaimer: I attended the talk about this paper, but have only skimmed the text of the paper itself.

Player modeling is a sub-area of game AI concerned with representing and tracking players' mental states and experiences while playing a game. This is the first paper I've seen addressing the problem in an interactive narrative context. BDI stands for Belief, Desire, and Intention, a philosophical framework for agent modeling (from 1987) that supposes all actions are driven by those three things, which relate to one another in the following way:
The hypothesis stated in this work is that BDI suffices as a model of "folk psychology," or "how I think you think," as Rivera-Villicana put it in her talk -- so in turn, it can be used to model a human player's traversal of a constructed, text-rendered space with a short puzzle and a win condition. Having a good model of how humans play this kind of game, i.e. how they traverse the space to find a solution, can inform better design of interactive stories.

My favorite slide of the talk was a comparison between example play traces between the optimal playthrough and more cognitively-realistic playthroughs: 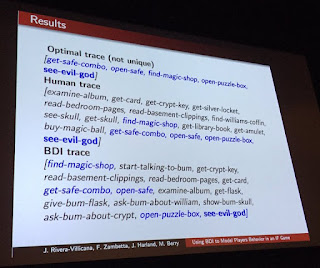 In a sense I kind of see player modeling in general, and this study in particular, as a kind of Wason selection task of game AI: it proves that theoretically optimal or rational reasoning makes a poor model for human reasoning, and in this case demonstrates it in the context of reasoning about what actions to take in an unknown environment.

Game of the Week: Fiasco 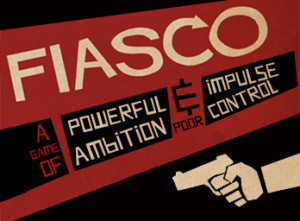 I finally got a chance to play Fiasco, a decentralized improvisational roleplaying game, with a few other conference attendees. I'd been hearing excellent things about it since Ian Horswill presented a system for generating Fiasco playsets at EXAG a year ago.

The premise is somewhere between freeform improvisation and tabletop roleplaying. The players (up to 5; my group had 4) sit in a circle, and the story is set up by forming relationships between adjacent pairs of people. For each pair, one member chooses a general category appropriate to a genre (e.g. family, work, crime, romance) and the other member chooses a specific relationship within that category (e.g. grandma, boss, drug dealer/client, ex-lover). They also choose a need, location, or object that relates to this relationship. Finally, players flesh out their characters with names and backgrounds and the details of the relationships they've outlined.

Play then proceeds cyclically with each player opting to either establish or resolve a scene, with the other players collaboratively filling in the complementary task (resolving or establishing). Midway through the game's 4 rounds, something called The Tilt happens, a crucial turning point in the action selected similarly to the character relationships, through an agreement between two players determined by a die roll. At the very end, the Aftermath scenes wrap up each character's storyline.

I'm pretty terrible at Improv -- I'm much more reflective than action-oriented, so it's hard for me to decisively manufacture narrative content under time pressure. That makes me pretty terrible at Fiasco, too. Luckily, the storytelling is collaborative, so there were few situations wherein my indecision actually held up the game -- often many people would suggest ideas that I could pick from among.

Occasionally I wished the game had more structure, or perhaps just that I were more practiced at it. I sort of enjoy the idea that the game's fun can scale with the players' creativity, but on the other hand, I wonder if the game could do more to support player creativity, e.g. a deck of cards with prompts to "unstick" hard-to-resolve situations, or an additional constraint to resolve the paralysis of a blank page (actually worse: friends staring at you while you think!). (Alcohol helps, but we ran out of bourbon too quickly.)

I loved having played this game in the evening preceding an amazing keynote talk by Semi Chellas, who spoke about her experience writing for Mad Men. She had a lot to say about the process of writing collaboratively, as a collective brain consisting of many humans, about the process of sharing an experience with a piece of music or a movie or a poetry reading to put everyone in the same mindset, then churning out ten stories per person in the space of two weeks. She frequently spoke of how story outcomes were overdetermined a lot, as in, "we all knew that X had to happen but there were too many reasons it could happen," and how the "multiplicity of voices & perspectives" in the writer's room sorted each other out and influenced each other to come into harmony ("we dream each other's dreams"). On the other hand, there are also constraints: a TV show can only be 47m03s long and this event has to happen on this timeline and this character needs to appear in these scenes... she called this the "crossword puzzle" aspect of TV writing. An absolutely stunning example of fitting an overdetermined story into an overconstrained crossword puzzle was the central plotline of the episode The Other Woman around the pursuit of the Jaguar account, which I recommend watching if you have the ability (e.g. Netflix).

Anyway, the experience she described sounded nothing like playing Fiasco, but I appreciated the context it gave me.

Bonus Game of the Week: The Room

First-day ICIDS keynote speaker Kevin Bruner of Telltale (and, less recently, well-loved games like Grim Fandango) discussed puzzle games in the a Q&A question about why Telltale doesn't do them. He offhandedly mentioned the iOS game The Room, which I then promptly downloaded (having believed I basically knew about all popular small-scale room-escape-style games from the last decade, but apparently being wrong). 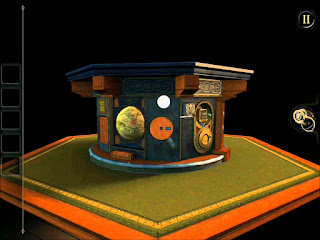 It's kind of like Monument Valley but a tad less obvious. Has a "puzzle box" premise with controls that are pleasantly physical, if occasionally clumsy. Very pretty, narrative-light, just the right amount of mentally taxing to recharge one's introvert battery with at the end of a long day of conference socializing (for example).